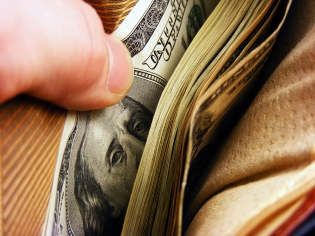 Have you been hearing the term 'wage garnishment' thrown around lately? Perhaps you're looking at a letter in the mail that seems to have come out of the clear blue, other than that debt a few years back that you haven't cleared up yet. There are a variety of situations where you might find yourself at the wrong end of a wage garnishment order and when that happens to you, it's time to act fast. Most wage garnishment orders or processes give you a certain number of days to respond, refute, or apply for an exemption from the garnishment consequences and if you haven't missed that deadline yet, there's still a chance you can avoid having your wages garnished altogether.

But the real question is, what happens if you don't make the clock, lose the lawsuit, or the court simply doesn't see your side of the problem? Wage garnishment is not a pretty experience, though it's better than many of the other consequences the courts can hand out, having your employer contacted and your income forcibly claimed is no one's idea of a good time. But how bad is it?

Working Through Your Employer

The first major problem is that all wage garnishment works directly through your employers. There's no way to hide your financial situation because your employers are contacted by the creditors or courts directly in order to claim some of your earnings. This means that your boss will be called and informed of your debt, then required to go through an extra procedure to garnish and turn over the debt payments. Needless to say, neither you nor your boss are going to be thrilled with the arrangement.

The one reprieve you have in this situation is that each state decides how much garnishment becomes too much. After all, if you lose too large a percentage of your income, you won't be able to live, work, and repay your debts. While it varies from state to state, here in California, that maximum is 25% of your income and never enough to bring you lower than 30 times the minimum wage. In other words, they can take as much money as they want as long as you have enough post-tax income to equal 30 hours of minimum wage labor left over and the garnishment amount is no more than a fourth of your total after-tax income.